Gorilla facts 'Who is who' Various About me Photos/videos Contact ☰

Hi. My name is Cindy. I was born on 3 November 1972 in a small village in Noord-Brabant, The Netherlands. Since December 2013 I live in Eindhoven with my boyfriend.

I love animals. At the moment I have 1 cat. On 30 August 2022 I took her from the local shelter. Since 13 May 2022, after having cats for 20 years, I didn't have one anymore. On that day my oldest cat died. My decision was to never have a cat again. But a life without cats is impossible, I found oud. Her estimated birth is in August 2020. She was a stray cat. They gave her the name Nobby at the shelter. I gave her a new name: Thandie. 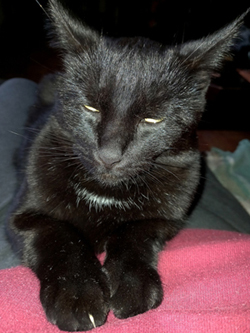 My biggest hobby is -of course- gorillas. I started visiting zoos regularly in 1998. Before that (from 1992) I went to Apenheul every now and then. Also I visited zoos with my parents and siblings when I was very young, but I have no idea how often and how many. I do remember visiting Beekse Bergen and Apenheul.

Gorillas quickly stole my heart. What a joy to see a group with a lot of big apes, with a lot of little ones. That was always so much fun.

In the early years I only visited Apenheul regularly. It took me some years before realizing that there were gorillas in other zoos too LOL In 2011 I also started visiting Artis, Blijdorp, GaiaZOO and Burgers' Zoo on a regular basis. Since the beginning of 2015 Zoo Krefeld is added to that list and since the beginning of 2016 Zoo Antwerp. Until 2016 I only went to Antwerp once a year (21 June 2012, 6 September 2013, 31 December 2014 and 1 December 2015). When I was told on 1 December 2015 that the gorillas would finally get an outdoor area, I was thrilled and decided to be a member. That lack of an outside area was the reason I only went once a year. I went home depressed. Those poor animals only had a few concrete enclosures. Due to circumstances I only go to Ouwehands between 0 and 2 times a year.

I know all the gorillas living in the zoos I visit by name. I also know the ages and/or dates of birth and who their parents are from the top of my head

At home I have a lot of gorilla things in my living room, most of them photos, figurines and mugs. I always have a gorilla as wallpaper on my mobile; it changes regularly which one that is. I have a 'friendly growl' of a silverback as WhatsApp notification sound and a chest beat as Messenger notification sound. I also have a gorilla on the background of my tablet, laptop and desktop. I have a placemat with a gorilla since January 2016 (Bitono from Ouwehands, where I also bought the placemat). Before it was one with an orangutan on it.

After years of using a Rolling Stones tongue as a mouse pad, I had a mouse pad made with a photo I took myself. It's Miliki and Kidogo with their two children, Pepe and Bobóto.

I have a wall full of gorillas. It started small, but changed a bit during the time. Since the death of Boma and Massa (1 January 2020) it has really changed drastically and there is a lot! The wall currently looks like this:

For those who wonder: at the top right of my screen is a death mask.

And like I said, I have several figurines. They used to be on my friend's old amplifier that you see above against 'the gorilla wall'. I moved them to an old CD cabinet in 2020, because there wasn't enough place anymore.

The frame with the red background on top is a tuft of hair from a silverback that I got from a keeper. I also have a 3D gorilla lamp. I'll take a photo soon, also from some other gorilla things I have.

And then it will probably happen once ... a tattoo of a gorilla. Well, 'a gorilla' ... the gorilla of gorillas! I want to have Amahoro tattooed on my body.

I like other animals too of course. But not like the gorillas. In second place are orangutans for those wondering.

At the moment I am without a job. I really need to find one soon. I want to go back to my previous profession, but it's not working out so far unfortunately . So I had enough time to improve my website. It was quite outdated. Not mobile friendly at all.

My other hobbies are the following. I am addicted to music. Something I regularly (on very busy days) combine with my zoo visits: listen to music (so that I don't hear the noise and nonsense of other visitors). I like different types of music. To name a few favorite bands/artists: The Rolling Stones, , Golden Earring, Alice Cooper, Meat Loaf, AC/DC, Ian Parker, Gov't Mule, De Dijk and many many many others. Favorite is blues rock, blues and (hard) rock. But I can also enjoy funk, reggae and some types of pop. Since the beginning of 2020 I also listen to classical music a lot. It gave me the peace I needed after the news of the death of 'my dear 7 ape friends' in Zoo Krefeld.

Before the euro was introduced as money in Europe, I also went to live shows a lot. After that it has become an expensive hobby. Exceptions are various blues concerts and blues festivals luckily.

I also play online board games on the internet (www.jijbent.nl). Besides that I also play a number of games via Facebook, especially various candy crush games and rummikub.

Reading is also something I enjoy, but I have been taking less time to do that lately. If I read, it's thrillers in English from American authors. When a book is translated into Dutch, it loses its power. I only read in Dutch from Scandinavian and of course Dutch authors.

The most recent book I read was: No one loved gorillas more - letters from the mist, by Camilla De La Bédoyère (20 Nov 2022).

↥ back to the top ↥