To start: in every family group in zoos there's only one adult, who is the leader. He can be recognized by a lot of grey hairs on his back and legs and his size. The western lowland silverbacks really have 'grey pants' so to say (where mountain gorilla silverbacks have only a grey band across their back). Sometimes also a big part of their upper back or even shoulders are grey. It's different with every silverback.

A lot of people yell out "look that old one"(or words alike), but the grey hairs don't have anything to do with the age! Because of hormones a male turns grey, as soon as he's the only adult male in a group with females. For instance, when a male moves from a family group at the age of 10 to his own group, he slowly turns grey. He can have these grey hairs when he's 11. I don't remember where I heard it, but I heard someone once tell it can be compared to growing a beard with human males. My thought was 'that's not correct, because growing a beard happens to boys no matter if he's still living with his dad or not'. The turning grey with gorillas is slightly suppressed when a young male still lives with his dad.

It's always funny to hear people say 'that old one' about the silverbacks in Artis or Blijdorp. In both zoos the silverback is the youngest one of the adults. People are very amazed when I tell them. All part of my education

Another phrase I hate when people call the silverback (or other gorillas) 'that fat one'. It's so negative (big sigh).

The tasks of a silverback in zoos: he keeps an eye on everything and everyone; most of the time lying down, but also sitting

If necessary he intervenes. Most of the time that's when two (or more) of his females have an argument. Luckily that doesn't happen often, but if it does happen, he punishes one of the two by pushing her to the floor and biting her once. Most of the times he does that with the fighting female who's the lowest in ranking. But luckily he knows justice and if the higher ranked female is to blame, he punishes her. Sometimes it also is enough just to stand up and look at both ladies.

The silverbacks I visit don't intervene when a kid has an argument with another kid. That's their mom's job. He also stays away from arguments between a mom and kid (either one of their own or from another female).

Besides above the silverback is the one who can claim all food if he wants to and sometimes he does (especially if it's his favourite food). In general: food around him is his. The others won't come close. And if he sees another one with his favourite food and he wants it, he gets up to get it. Believe me, he won't take it, he just gets it. Every gorilla in a group immediately drops what he/she's holding

Well, 'every' gorilla .. except some cheeky kids now and then

They just run away and hide somewhere where the silverback can't go.

Every silverback has his own personality of course. Some play with their kids, some don't.

Since 2016 I'm following the development from two young males. One is Matadi in Zoo Antwerp. He arrived there on 24 February 2016 at the age of 12. He changed a lot in those years.

But his change isn't as extreme as the 2nd male I'm following, which is Komale in Safaripark Beekse Bergen. Hij arrived there on 13 July 2016 at the age of 9. Below there are photos of him from shortly after his arrival until now.

In zoos with bachelors you see several silverbacks. That development is also there with all males. I visit one bachelor group at a regular base (Safaripark Beekse Bergen); the other one (Ouwehands) I only visit about twice a year. I don't like that zoo and the enclosure of the gorillas. It's impossible to follow them all day during a visit because of how it's constructed.

Every silverback has a large sagittal crest on top of his head. That's not because he has so many so many females and kids

His jaw muscles are there. These are attached to the crest on his head. Watch a silverback when he's eating; the top of is head is moving.

Something else about a silverback is something you wouldn't expect: the size of his penis. You can't see a silverback's penis very well. I have seen many silverbacks lying down in front of me with their legs spread: but because of all the hair and the penis being so small, it just can't be seen. Once I saw a gorilla's penis in erection. That was Bokito. He was looking at a few older ladies who were standing next to me. Since Bokito is hand reared, he's focused on females. He has a soft spot for blond or greyish ladies. So while he was watching these ladies, his penis 'went up'

The funny thing: when I posted this photo on Facebook asking what the viewer was looking at, everyone thought it was his nipple.

Typical for a silverback is his odour now and then. A lot of people dislike that odour; I don't. That odour appears whit various sorts of 'excitement' not (only) sexual

Development Komale, Safaripark Beekse Bergen
I took the first photo of him on 15 August 2016. Not a top photo. In the photos you see the dates I took them. 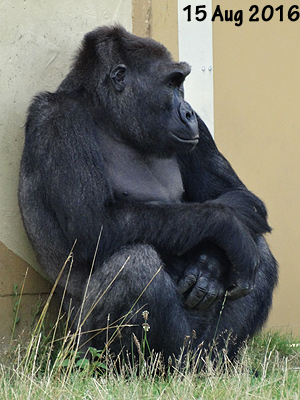 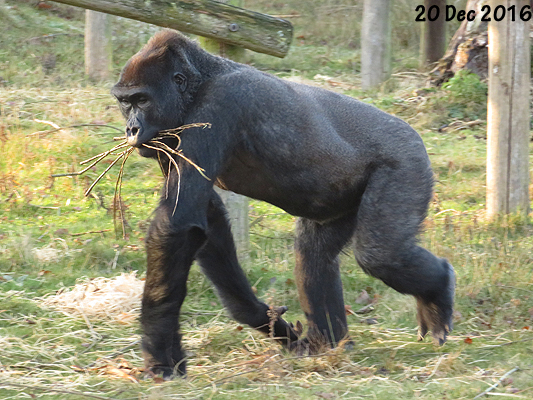 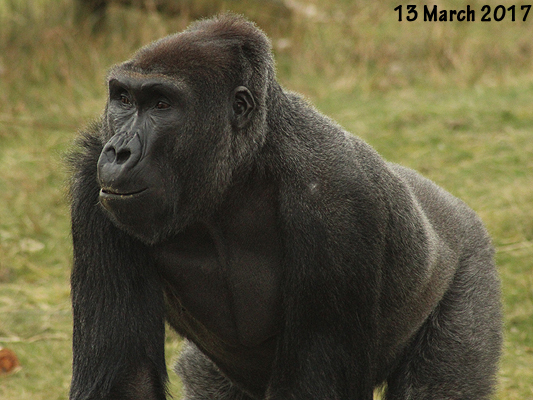 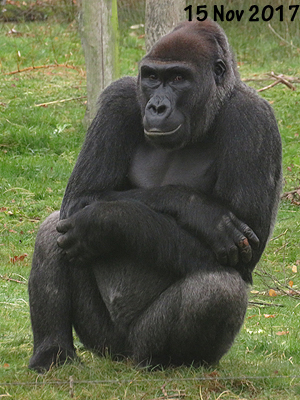 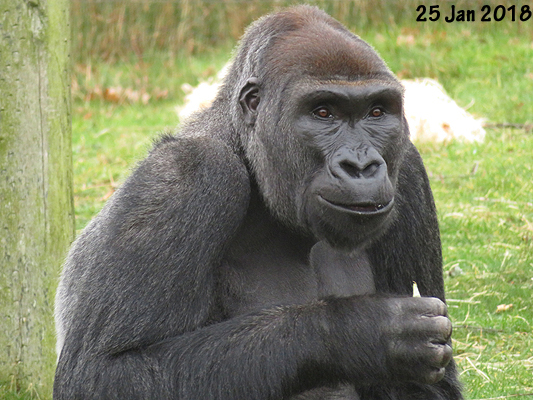 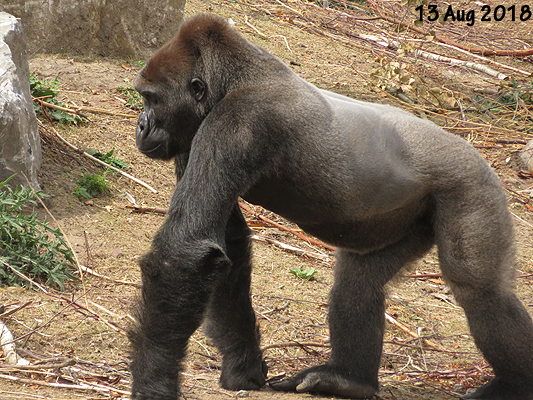 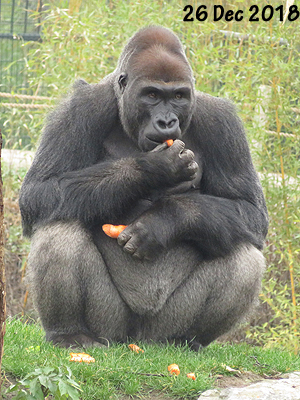 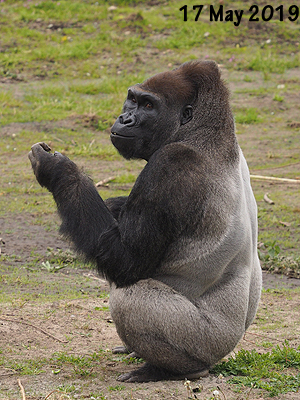 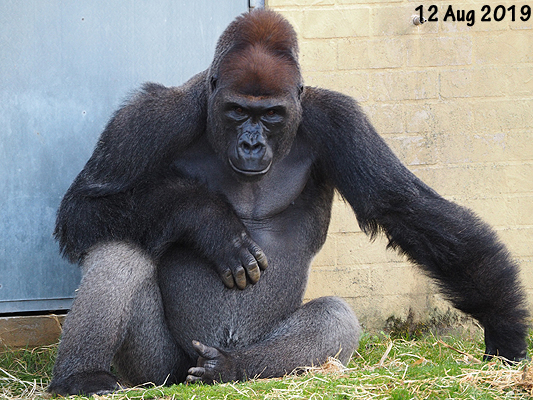 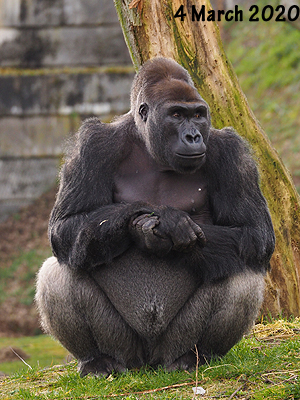 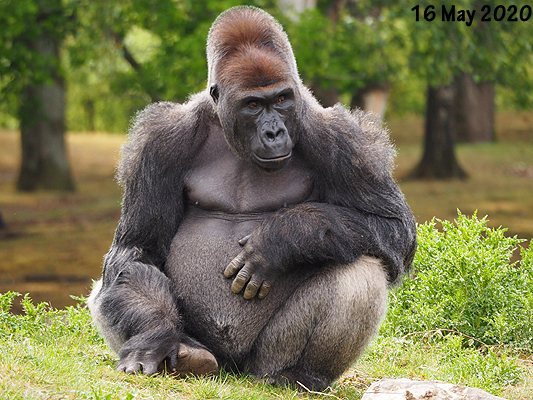 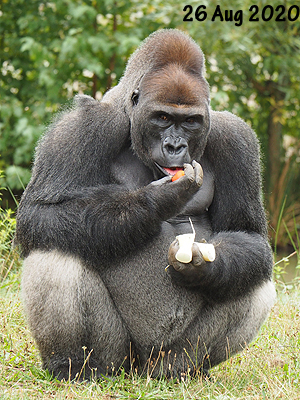 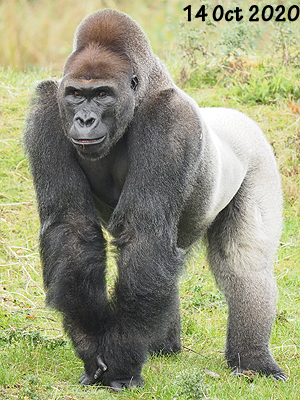 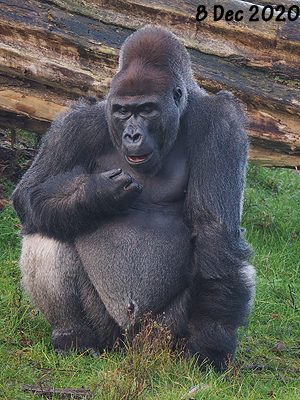 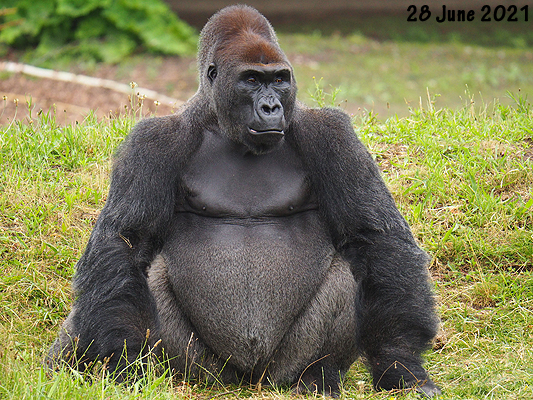 The most special was to see him again after 2 months of lockdown, beginning 2020. When I saw him the first time I was like 'wowwwwwwwwwwww'. Judge yourself (both photos besides each other). 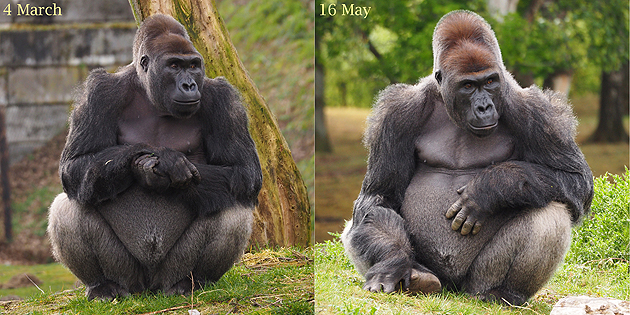 After the longer lockdown (half December 2020 - half May 2021) I didn't see the difference that well. I saw him and his family fir the first time on 4 June. I only spend a few hours with them. It was too hot and they were hiding for the sun all the time; taking photos was impossible. On 28 June I did see him better (see last photo above).