Gorillas (like other animals) eat their own poop. The term for it is coprophagy. When visitors see this they start screaming "oohhh nooo, he's eating his own poop  that's disgusting " and most of the time they turn away and even walk away. But it isn't disgusting. It's a normal thing. It also happens in the wild (but less than in zoos).

There are several reasons for doing it. Sometimes they had some very tasty food a day earlier and this way they can enjoy it again. But the main goal is to get enough vitamins (especially vitamin b12) and minerals. Vitamin b12 can only be found in animal-based foods. Well, gorillas don't eat that kind of food. In the wild there are gorillas know to eat termites, so they do get these vitamins, but -again- not in zoos. But apparently vitamin b12 is being made in the end of their digestive system (this still amazes me, but I know it's true).

Not all gorillas eat all their poop all of the time.

In Burgers' Zoo there was a gorilla who didn't eat her poop. The result: she was often a little bit ill: had a cold or had the flu. To prevent that from happening as much as possible, they served her tea with vitamin supplements every day. Then suddenly she started eating her poop too and they stopped with the supplements and she was okay from that day on. At one point, some years ago, I witnessed a problem with Bauwi. Also a result of not enough vitamins. He wasn't able to properly move. One of his arms was temporarily 'disabled'. That day I saw him walking upright a lot, with that one arm to his body. A day later it was even worse. A friend of mine was in the zoo and she saw him crawling in stead of walking. Poor boy. Luckily they were able to give him extra supplements and he also started to eat his own poop again.

Their poop isn't disgusting by the way. Ours is, because we eat meat; isn't that what makes it smell so terrible? The gorillas don't eat meat.

Another thing they do is eating mucus (more normal word maybe snot?). Something a lot of people also dislike. If I hear them saying something about it I sometimes ask "you do that yourself too? ". How else can they know it's gross?

My idea, it tastes salty and they don't eat salt and do like that now and then. I also see (mostly) silverbacks taking sweat from under their armpit in the summer to put it in their mouth.

And one more thing: giving up food and eating it again. Most of the time hand reared gorillas do it, but not only hand raised gorillas. The former silverback Kumba in Zoo Antwerp (he died in 2016) did it too and so did the current silverback Matadi (did, I haven't seen him doing it recently; maybe he had to get used to the other food he got in Antwerp?). I see the 3 hand reared gorillas Sindy (Artis), Sangha (GaiaZOO) and Bokito (Blijdorp) dot it regularly. But I never witnessed hand reared Makoua (Burgers' Zoo) do it. Sindy, Sangha and Bokito all have their own way to do it. Sanga keeps it in her mouth, while her full brother Bokito just throws it out and starts eating it again from the floor. Funny sight; I'll search for a photo from his pose while eating it again. He also shares his vomit with his young kids

During a visit to Blijdorp on 16 February 2016 I was amazed at Bo and his vomiting. There was a lot of 'liquid'. He was on a top plateau and that liquid dripped down. His daughter Tonka just wiped some of the plateau and licked it up; her bigger sister did it different

To end this subject, here a photo of a bachelor from Safaripark Beekse Bergen eating a dung 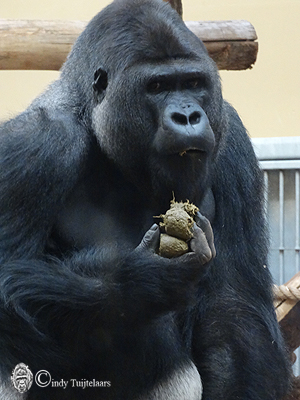